COOKIES: Ad-tech companies fighting over who gets control of first-party “cookie” or identity; a role for ITEGA? 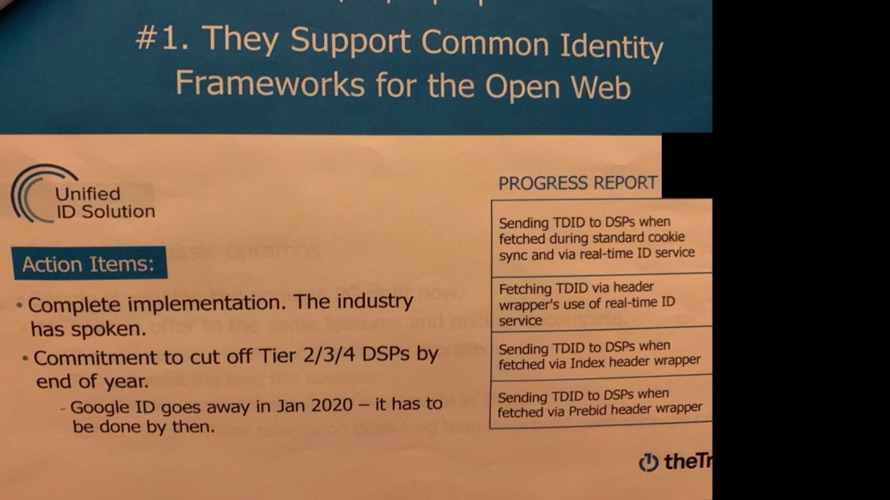 COOKIES: Ad-tech companies fighting over who gets control of first-party “cookie” or identity; a role for ITEGA?

A competitive war is underway among titans of the ad-tech industry — and at least one scrappy startup — over who will emerge in control as the era of third-party cookie matching is squelched by tough European and U.S.-based privacy regulation.

The goal is to create a universal identity infrastructure for the web to compete with the first-party data ecosystems build by Facebook, Google and Amazon.  Each of those “platforms” have billions of user email addresses and the ability to track and analyze user activity across wide swaths of the web.

The battleground — who will control the “first-party domain” for the purpose of synchronizing user data for ad targeting. The goal is to present marketers — advertisers —  with a quality source of user demographics competitive with the terabytes of first-party data and email addresses stored by the Facebook, Google and Amazon platforms.

“Google and Facebook have an insatiable need for data because the data they use to then sell advertising,” Toni Bush, a top lobbyist for News Corp., said during a Capitol Hill panel discussion organized June 3 by the News Media Alliance, the newspaper lobbying organization seeking an antitrust exemption to collectively bargain with the platforms. “We’re always at a disadvantage because of the amount of data they collect,” she said.

If one of the four options gets to scale, the programmatic ad industry would become dependent on having access to a first-party domain system whose non-publisher, ad-tech industry stockholders or member owners could profit by being in a dominant control position of the web’s emerging identity infrastructure.

So far, there is no equivalent effort led by publishers, and no effort within the ad-tech industry to move away from targeting individuals in the direction of a contextual advertising approach that would benefit publishers.  However, the Local Media Consortium is working with ITEGA, which is a public-benefit, 501(c)3 nonprofit corporation with no owners.

“The ad tech ecosystem is a tangled mess of identity data,” Albert Wang, a product marketing manager at SpotX wrote in a Feb. 14 blog post. “The struggle to accurately track users while respecting privacy has been the white whale of the industry for years.”

A goal of the ad-tech competitors is to eliminate the load-time delays resulting from dozens of unrelated, third-party “cookie syncs” when a user goes to a page with ad views on it, to eliminate the matching “sync chain”.

Without a widely adopted universal solution in place, industry players continue to drop their own unique cookies on users to enhance ad targeting and scale business, says Wang. “As the identity webs of users become increasingly entangled, more and more of the ecosystem has come around to the idea of adopting a universal ID.”

A fifth option is based on the assumption that GDPR and CCPA regulations will gradually make it impossible to obtain necessary user consent to drop “third-party” cookies on browser — at the same time browsers like Safari and Firefox block most such implementations.

“Without third-party cookies to connect data and audience-based buying, targeting becomes challenging and will strictly move to contextual-based buying without a historical consumer view,” suggests Manny Puentes, founder/CEO of Rebel Ai, a Louiseville, Colo., startup that is marketing the idea of a user taxonomy. ” Instead of approaching the problem from a universal cookie angle, an independent trade group like the IAB should step in and create a standardized consumer taxonomy that will allow for identity- and interest-based targeting while still maintaining user privacy.”

The four ad-tech initiatives seeking to control identity matching are:

The first three are part of the Advertising ID Consortium, Inc., a non-stock Delaware corporation whose members control its assets.  It’s board of directors is all from ad-tech companies, including Index Exchange, LiveRamp and The Trade Desk. It says 30 platforms are participating and are using the domain http://adnxs.com.  AppNexus was part of the consortium until it was purchased by AT&T, and then dropped out. DigiTrust integrates with the consortium.

This week, authoritative ad-tech consultant and observer Ratko Vidakovic, in his “AdProfs” newsletter summarized Ronan Shields’ reporting at AdWeek.  Shields wrote that The Trade Desk is pushing its “Unified ID Solution”, quoting anonymous sources as saying if smaller-tier ad exchanges don’t use it, they will be cut out of any ad bidding “effectively relegating rival target offerings below its own.”

WHAT IS AT STAKE

One of the simplest visual explanations of why identity management is important for the current system of targetted “programmatic” advertising is this video prepared by ID5 and presented on its website. Just over one year after its launch, ID5 says it reaches one billion devices per month in Europe and provides matching capabilities with more than 35 ad tech platforms.

A longer video has IndexExchange VP of product Mike O’Sullivan walking through a white-board summary of an idea to created a “hashed email” as a universal ID to cross-site link user data.   Sullivan discusses: