See also: A short history of the origins and purposes of ITEGA (link)

ITEGA was incubated starting in 2008 by the Donald W. Reynolds Journalism Institute at the University of Missouri.  It began as a research program for a one-year fellowship by Bill Densmore.  (READ THE ORIGINAL PROPOSAL)  It was informed by a 2007 meeting at MIT as well as thinking dating back to 1994. (See: The “four-party model”).

ITEGA’s founding meeting took place at the Pocantico Center of the Rockefeller Brothers Fund in Tarrytown, N.Y., in April, 2018 and involved some 30 participants. (Read the  outcomes report from Pocantico.)  But it was preceeded by years of research, convenings and study.

During 2015, pursuant to its “call to action”, the Donald W. Reynolds Journalism Institute convened five task-group meetings in five U.S. locations involving more than 40 U.S. news industry participants, researchers, experts and observers to consider a call to action drawn from the research report “From Persona to Payment.”
The task groups addressed four aspects of member/partner development, authentication and identity management, content description-tagging-sharing and selling; and user data and exchange.

A 2015 report and white paper  updated research in 2010-2011 by RJI fellow Bill Densmore. Densmore was asked then to write a “white paper” assessing the journalism landscape in light of two years of research by the Information Valet Project. The report executive summary and findings made a  key recommendation about how to sustain the values, principles and purposes of journalism.

Accompanying the 2015 report were a series of supplemental stories including:

The 2015 report did not detail consumer services or plead for a particular industry’s survival. Rather, it argued for infrastructure collaboration around new services that can sustain the values, principles and purposes of journalism for a participatory democracy. Unless journalism publishers respond, bundlers, aggregators and platform owners would become the dominant providers – and financial beneficiaries — of providing information to citizens, it concluded.

An earlier  54-page paper, From Paper to Persona: Managing Privacy and Information Overload; Sustaining Journalism in the Attention Age, was published Aug. 4, 2011. (SUMMARY) Key points asserted in the paper and an accompaning public announcement: 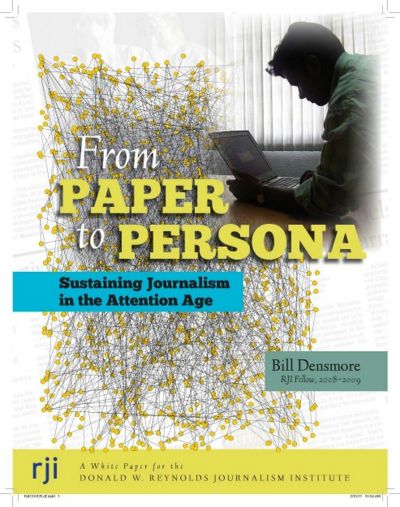 “A non-profit collaboration to share technology, users and content could help news organizations find new revenues and become better at serving the public, according to a report from the Donald W. Reynolds Journalism Institute at the University of Missouri.”

The report’s author called for the creation of a public-benefit entity (with a working title, “Information Trust Association”).  It would help create and govern – but not own or operate – a shared-user network for trust, identity and information commerce layered atop and supporting the existing World Wide Web. (READ 2011 ANNOUNCEMENT)
The network, or exchange, would: The Information Valet Project fellowship laid groundwork for the ITA concept through five events and ongoing conversations with dozens of thought leaders within the news and technology industries:

On May 5, 2009, Densmore summarized the Information Valet Project gatherings, research and findings in a 12-minute video presentation at RJI, accompanied by a slide deck about the RJI process..
In December, 2009, Densmore provided testimony about the ITA idea at a Federal Trade Commission public symposium. The testimony posted on the IVP wiki pages with accompanying slides, has been accessed more than 33,000 times since it was posted: http://www.newshare.com/wiki/index.php/Jta